What Happens When Electronics End Up In Landfills 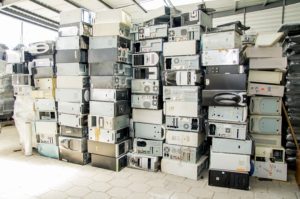 Dumping electronics in landfills deprive recycling facilities of the ability to recover valuable metals and introduce harmful, toxic metals into the environment.

The only benefit is it’s an easy way for the former owner to dispose of the device; otherwise, electronics recycling provides an all-around better option.

It’s not the fact that the devices use electricity that makes them dangerous for the environment when in landfills: the dangers of electronics in landfills come from many of the metals used in those devices.

Some common dangerous metals found in electronics include:

These metals will degrade over time and seep into nearby soil and groundwater thus contaminating the environment which can cause substantially hazardous effects on the health of people and animals living in the vicinity of these waste locations.

Missing out on Valuable Metal Recovery

Today’s electronic devices that often end up in landfills feature small-to-large amounts of valuable metals including:

If properly recovered, these metals can be removed from disposed of devices, melted down, and reused in new devices.

Additionally, these metals exist infinite quantities in the environment, so throwing them out instead of recycling them in many cases both depletes resources and drives up costs.

Preventing Waste from Ending up in Landfills

The general population can make a big difference in how much e-waste ends up in landfills with just a little effort in applying the old reduce, reuse, recycle adage.

Unfortunately, the manufacturing industry’s success with driving down prices makes it less appealing for consumers to reduce and reuse.

The following devices get replaced often, with the older versions typically ending up in landfills:

People are recycling electronics at a higher rate as time goes on, which may be attributed to a combination of people being more aware of e waste hazards as well as national, state, and local laws requiring electronics recycling.

Electronics recycling companies including Kansas City e-Cycle do not use landfills when disposing of e-waste and can provide concerned customers with a certificate of destruction if desired.

Kansas City area businesses small-to-large, government agencies, and individuals can work with the R2- and ISO-certified e-Cycle for both electronics recycling and data destruction services.

REQUEST an
Estimate or Pickup

We use cookies and other tracking technologies to ensure you get the best experience on our website, assist with navigation, analyze your use of our services, and assist with our promotional and marketing efforts. If you continue without changing your browser settings, you are providing consent to our Cookie Policy. Click here to learn more about our privacy policy.